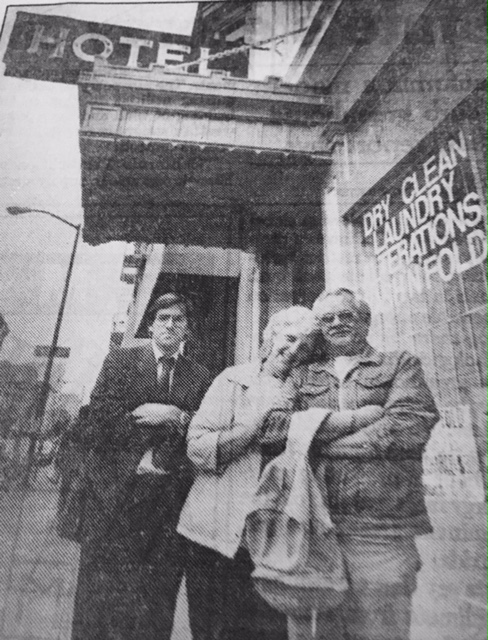 Randy Shaw in Nov. 1988 with some of the first group of homeless persons placed in SROs through THC's Modified Payment Program

In 1982, I was working fulltime as the only employee of the Tenderloin Housing Clinic when widespread visible homelessness emerged in San Francisco. I was trying to preserve and improve single room occupancy (SRO) hotels for low-income tenants even before this crisis, and its onset increased the challenge of securing such housing.

Trying to make SROs available for the poor in the 1980’s was no easy task.

There was far less public and political support for preserving SROs in those days. Few in city government cared that SRO tenants lived in squalor or were physically removed from housing rather than legally evicted.

If you had told me back then that in 2016 the Tenderloin Housing Clinic would be leasing 18 SROs, providing permanent housing to over 2000 formerly homeless tenants, and  helping an additional 500 more stay in housing through money management services I would have said you were dreaming.

But that’s what happened. THC’s experience reflects a larger truth that this week’s SF Homeless Project will hopefully convey: despite much work left to be done, San Francisco has made incredible strides from where we were when the homeless crisis began.

The presence of 6000 homeless in the city does not change this truth. And San Francisco has made enormous progress despite the federal government’s abandoning its historic duty under the 1949 Housing Act to provide safe and affordable housing for all Americans.

As KPIX reporter Wilson Walker showed in his June 26 story on the background of San Francisco homelessness, activists first had to convince San Francisco Mayor Dianne Feinstein that homelessness was not a “temporary” problem. We never succeeded.

Feinstein stubbornly insisted on viewing homelessness as temporary until her last days in office. Her view led the city to squander over $100 million transforming 40-50 SROs into de facto shelters instead of using these buildings for permanent housing.

It was incredibly frustrating to see the city spending millions on 1-3 night stays in SROs instead of  permanent housing.  We saw SROs as the refuge for those unable to afford any other housing in San Francisco, and viewed the city’s removal of over 1000 rooms each night as making it near impossible for the poor to obtain permanent housing.

I got involved with the homeless issue because Feinstein’s “hotline hotel” program  undermined our efforts to improve SRO conditions and to return SROs to longterm housing. We got a ton of media coverage on the deplorable living conditions that San Francisco was funding, but the hotline program continued. After all, if you refuse to invest in permanent solutions then paying for short-term stays for homeless people is the alternative.

San Francisco could easily have funded the nonprofit purchase of five to ten hotels during Feinstein’s tenure. Instead we funded none.

In 1987 I joined with other activists in creating the Coalition on Homelessness. This was when it was still a coalition of people and groups, not the separate nonprofit organization it became. We put together a proposal for the next mayor, and gave it to Art Agnos soon after he took office in January 1988.

Agnos implemented virtually everything in our proposal, along with our recommendation that he select Robert Prentice as his new Homeless Coordinator. I had focused on getting permanent tenants back in SROs through the city instituting a modified payments program (MPP). The MPP had the tenants welfare check go directly to a nonprofit who would then pay the landlord; this process greatly reduced nonpayment evictions and gave landlords the protection they needed to rent to permanent tenants.

When I asked Agnos’ Director of Human Services to implement the MPP program, she said that if I wanted it to happen then the THC would have to run it. At the time we were exclusively a law office. We did not want to become a service provider but  saw the MPP as the only way to get longterm tenants back in SROs.

So THC launched the MPP with a small foundation grant in 1988 while the city decided whether to fund the program. It soon did, and after the 1989 earthquake gave Agnos the excuse needed to end the hotline—the Anglo Hotel on 6th Street was demolished, and had been a 100% hotline hotel—it was soon entirely replaced by THC’s MPP.

With the hotline gone we quickly had over 1000 permanent tenants paying rent through our program. San Francisco had made a complete shift from using SROs as shelters to returning them to permanent housing.

Agnos also funded the launch of the Community Housing Partnership (CHP) to purchase SROs for the formerly homeless. Both CHP and the nonprofit Coalition on Homelessness were originally housed in the Tenderloin Housing Clinic’s offices at 126 Hyde.

With homelessness still a crisis into the 1990’s, the media and conservatives found an alternative explanation: “problem street behavior.” This was favored because it offered a solution that did not involve increased government funding for housing; to the contrary, the line was that there was no point providing housing as people’s substance abuse problems would still keep them on the street.

Proponents of this view never explained why homelessness did not emerge during the drug fueled 1960’s and 70’s; the difference then was that poor people with substance abuse problems could still afford rent.

In 1995,  THC’s MPP was threatened by a competing proposal by the Jordan administration that required welfare recipients to use their checks to pay rent in for-profit run hotels. Unlike the subsequent Care Not Cash program, which provided nonprofit run hotels for all recipients, Jordan’s Direct Rent Program had no safeguard for hotel living conditions or tenants legal rights.

Due to THC’s long relationship with hotel owners through our MPP, the vast majority refused to join Jordan’s program.  Political pressure from homeless advocacy groups slowed the program’s implementation, and a lawsuit then enjoined it. Fulfilling a campaign pledge, new Mayor Willie Brown killed Jordan’s program on his first day in office.

Brown’s election occurred during economic down times, but it was soon followed by the dot com boom that raised rents throughout San Francisco, including in SROs. Our welfare tenants could no longer afford housing even through the MPP’s discounted rents, so we needed a new strategy. THC saw the  answer in nonprofits leasing hotels, and solicited interest from nonprofit housing groups to begin this process. Mayor Brown was completely behind funding this strategy, a fact often forgotten about his administration.

While I facilitated the SF Health Department’s leasing of the Windsor and Pacific Bay Inn hotels in 1998, no nonprofit housing group wanted to lease SROs. The owners of the Seneca Hotel (204 rooms) at 34 6th Street had been pleading with THC for a year to lease the property, and we finally relented.

We began that lease on May 1, 1999. A month later Mayor Brown asked us to lease two more hotels in exchange for closing the Mission Rock shelter, so by October 1, 1999 we had the Mission (248 rooms) and Jefferson (111 rooms) under lease.

Then-Supervisor Gavin Newsom later criticized THC for “sole source” contracts for our leased hotels. The truth was that nobody else wanted to do it, as proved when THC was the only entity to respond to RFP’s. Newsom more than made up for his error by using Care Not Cash to add $25 million annually to the master leasing program, a funding allocation that continues to this day.

Master leasing has also advanced my longtime goal of returning SROs to their historic status as homes for longterm tenants. Over 90% of those moving into THC hotels stay at least a year, and 75% of those placed since 2008 either still live there or left in good standing (they either died, moved to new housing, or left the city).

The sense of community that was lost when SROs became shelters during the hotline years has now been restored. It took almost two decades to accomplish this. This process has been aided by on-site case workers (hence the term “supportive housing”) and the city’s funding of SRO Collaboratives to combat feelings of isolation common among SRO tenants.

What we could not do in San Francisco is make up for the federal government’s failure to subsidize housing for all or even most of those who cannot otherwise afford rent. That’s what every other industrialized nation does, and what the United States fails to do.

Recognizing that we needed more federal dollars to solve San Francisco homelessness, in 1999 I joined others in building a national campaign for a National Housing Trust Fund. We were making progress in getting affordable housing back on the national priority list until George W. Bush took office in 2001. It’s been hard getting more federal housing money even under Barack Obama, as housing suffers the fate of all underfunded domestic spending programs.

The SF Homeless Project stories this week will hopefully convey a renewed appreciation for the thousands of people doing their best to get and keep people housed. It is hard work that the media too often only covers when something goes wrong. The thousands of people nonprofits and city agencies have helped to exit homelessness is a major accomplishment that should not be downplayed because the problem remains.

Thanks to the strong support of Housing First by Mayor Ed Lee, THC will be adding another three hotels and 250 units to the city’s master leasing stock this year, as we continue to try to meet the outsized need. And like other nonprofits, we will continue trying to meet this need until the nation ends its shameful failure to ensure safe and decent housing for all.

Randy Shaw is Editor of Beyond Chron and Director of the Tenderloin Housing Clinic. He describes how the hotline hotel program wrecked SROs in The Tenderloin: Sex, Crime and Resistance in the Heart of San Francisco