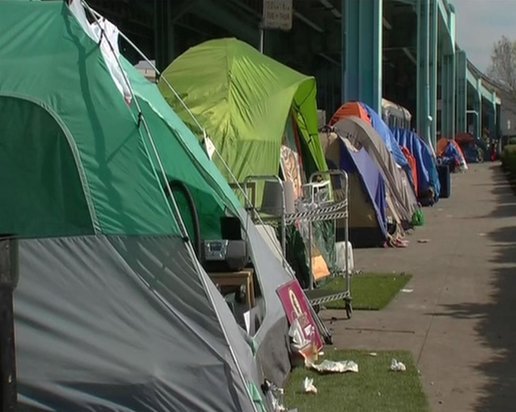 In my political forecast for 2016, I saw San Francisco progressives having a big edge in the November elections. The housing crisis, inequality, and perceptions that the system is “rigged” benefited progressive supervisor candidates as well as Jane Kim in her race for State Senate.

But departing progressive Supervisors David Campos and John Avalos are trying to change this political calculus. They are injecting a new and problematic issue into the November races:  the right to camp in public places.  Campos has never stopped criticizing Mayor Lee’s politically popular closure of the Division Street encampment, and last week, Avalos asked the City Attorney to draft legislation to “impose encampment sweep rules, including a 15-day notice and a permanent housing plan for each occupant. The proposal would also temporarily permit encampments if there is no housing available and require The City to provide services like toilets and refuse.”

I’ve seen this script before. It did not end well for Mayor Art Agnos in his 1991 re-election campaign, and backing public camping will cost progressives Board control in the November elections.

Seizing Defeat from Jaws of Victory

Although both have been on the Board since 2009, Campos and Avalos never backed public camping in their own races for supervisor, State Assembly and mayor respectively.  Encampments existed, but neither made them a public issue.

Now these two termed out supervisors are pushing a right to camp agenda that they did not adopt for their own campaigns.  And while Campos hopes to run for a newly created Public Advocate position—which would broaden his power to promote campers’ rights– Avalos’ political career will soon end.

By backing public camping and seeking legislation to expand it, Campos and Avalos endanger the prospects of fellow progressives. Progressive candidates should not go along.

The progressive candidate most impacted by Avalos’ right to camp plan is Kimberly Alvarenga, who Avalos supports to succeed him as D11 Supervisor. Alvarenga already faces a tough challenge against Ahsha Safai, who is well known in the district and narrowly lost to Avalos in 2008.

I don’t think D11 voters want campsites on their sidewalks and in their public spaces. If voters identify Alvarenga with Avalos’ camping proposal, it will ensure Safai’s victory.

Sandra Fewer has the strongest campaign in D1, but even she could find herself in trouble if Richmond residents believe she will support camping along Clement Street. D5 voters are more supportive of homeless services, but Dean Preston’s insurgent campaign against London Breed will not benefit from his association with the right to camp.

I am not even sure the right to camp is popular in Campos’ D9. This could deter Campos’ ally Hillary Ronen from supporting such a policy in her race against Josh Arce.

Progressives have such a big edge on the issues voters care about in November that Campos and Avalos are trying to grasp defeat from the jaws of victory.

Nor is backing a public right to camp is a courageous and principled stand. To the contrary, there is nothing “progressive” about allowing the city’s public spaces and sidewalks to become campgrounds. Such reduces the quality of life for all San Franciscans, and does nothing to get those living in encampments into housing. Avalos’ plan requires the city to pay for toilets and refuse services, but such encampments inevitably result in health code violations and other unsafe conditions for nearby residents and businesses.

Considering the permit hoops small restaurants and cafes face in getting the right to have sidewalk seating, the effort to short-circuit these requirements for sidewalk camping will strike many voters as an example of misplaced priorities. These voters will reject candidates supporting such a policy.

Why would progressive supervisors want to turn the November elections into a referendum on the right to camp?  It’s a great question.

Jane Kim Gets It

In contrast to Campos and Avalos, Jane Kim understands how progressives can win citywide races. Kim has framed her State Senate race around progressive issues that broaden rather than diminish her support.

A prime example is Kim’s identification with increasing inclusionary housing requirements. Affordable housing is the top issue in San Francisco, and Kim was the driving force behind Prop C, which raises these requirements from 12%-25%. Prop C is expected to win voter approval in June.

While some developers oppose Prop C, others appreciate the certainty that Kim and her colleague Aaron Peskin are bringing to the inclusionary housing process. Peskin noted at a Land Use hearing last week that the Kim-Peskin plan involves no “backroom deals,” effectively eliminating the one-off shakedowns from community groups that developers already complying with the law too often encounter.

Kim is also pushing free City College tuition for San Francisco residents, tapping into an issue that has propelled young voters support for Bernie Sanders. But unlike Sanders’s free college tuition proposal, Kim has a specific revenue raising plan—a November ballot measure for a “Mansion Tax” on the transfer of luxury homes that would raise $29 million annually.

Kim is demonstrating how progressives can win city, state and even national races. Increasing affordable housing and free college tuition are progressive issues that also draw moderate support. Unlike the right to camp in public places, Kim’s campaign is focusing on issues that expand rather than divide the progressive base.

Kim’s opponent, Scott Wiener, is trying to expand his moderate base by promoting progressive issues. For example, he has sponsored legislation expediting approvals for 100% affordable housing projects and expanding parental leave. Were Kim not out in front expanding her own support base, Wiener would win (I stand by my January forecast that Kim remains the favorite in this race).

Let’s hope Avalos thinks twice before bringing his right to camp legislation to the Board. It’s the wrong issue at the wrong time for San Francisco progressives.

Randy Shaw is Editor of Beyond Chron. He discusses the battle over public camping in The Activist’s Handbook: Winning Social Change in the 21st Century.