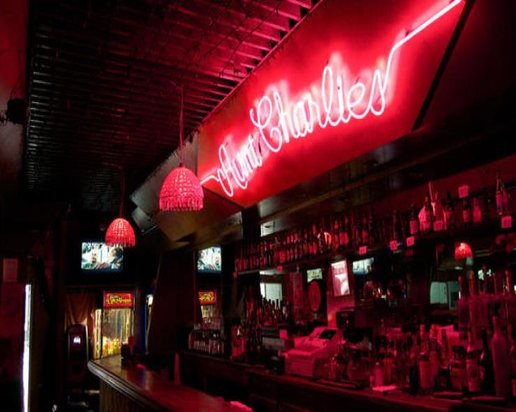 On February 24, a sold-out crowd attended the Tenderloin Museum’s showing of James Hosking’s documentary film and photo series, Beautiful by Night. The film follows three older drag entertainers at Aunt Charlie’s bar in the Tenderloin over the course of one evening. Sponsored by the Tenderloin Museum along with its Mid-Market neighbors Zendesk and Zoosk, the film sold out a Wednesday night showing three weeks in advance.

Why so much interest in a Tenderloin gay dive bar?

One answer is that Aunt Charlie’s remains a popular bar that also attracts the younger demographic that attended the film. But I think Aunt Charlie’s popularity is due to its authenticity. As San Franciscans fear that what makes the city genuine and unique is being lost, places that signify its authenticity are more treasured than ever before.

Nothing signifies authenticity more than Aunt Charlie’s and the neighborhood it inhabits, the Tenderloin.

There’s a difference between bemoaning all changes in San Francisco and wanting to preserve and appreciate the parts of the city’s past that helps define it.

Aunt Charlie’s Lounge opened in 1987. This was four decades after World War II helped transform the Tenderloin into the city’s leading center for gay bars.

I describe Tenderloin gay bars remarkable struggle against a San Francisco government desperate to close them in my book, The Tenderloin: Sex, Crime and Resistance in the Heart of San Francisco. In the 1940’s through the 1960’s, gays attending bars like Aunt Charlie’s had to resist being charged with a crime for doing so—and enough did to help launch the city’s gay and lesbian movement.

When Aunt Charlie’s opened, the battles of past decades had been won. The Tenderloin was full of openly gay bars. Aunt Charlie’s opened just as the neighborhood revival that began in the late 1970’s was in full swing. But as I also detail in my book, the Tenderloin’s progress went into sharp reverse in 1987 and its many other gay bars did not survive the decades long downturn (the Gangway closed this year due to lackluster management rather than a lack of commercial viability of gay bars)

Aunt Charlie’s is now one the last neighborhood gay dive bars not only in the Tenderloin, but the city. Located across the street from the site where queens led the 1966 Compton’s Cafeteria riots, Aunt Charlie’s is known for hosting San Francisco’s finest drag queens.

It’s fitting that Aunt Charlie’s thrives in the Tenderloin, a neighborhood even its detractors acknowledge for its authenticity.

Nor does the Tenderloin have new highrise buildings that have come to transform the image of SOMA. In fact, the neighborhood has few buildings of any type constructed in the last fifty years.

Walk down the heart of the Tenderloin on Eddy Street and you will notice that the buildings are largely the same as existed in 1930. The biggest change was the demolition of the Downtown Bowl and its replacement by Boeddeker Park in the early 1980’s. That happened so long ago that most now see the park as part of the neighborhood’s historic fabric.

Businesses have always come and gone in the Tenderloin but the structures that house them stay the same. The Tenderloin has never had to fight to stop a proposed new clothing store as the Mission did with Jack Spade. Its commercial spaces are too small to attract the  large corporate businesses opposed by activists in other neighborhoods.

Since its rebuilding in 1907, the Tenderloin’s legal economy was always driven by bars, restaurant and entertainment venues like Aunt Charlie’s. The same is true today.

Showing how connected today’s Tenderloin is to its past, the new projects revitalizing the neighborhood all fit within the bar, restaurant or entertainment category. They include PianoFight, the SPACE236 gallery, the Tenderloin Museum, CounterPulse (opening next month), 826 Valencia (a children’s writing program whose retail qualifies as entertainment, Big (new bar at Turk/Taylor opening soon), the Black Cat (restaurant at Eddy/Leavenworth opening in June), the Popsons burgers (opening on Taylor at Market next month), Onsen Hot Springs and Spa on Eddy at Hyde (which features a Japanese restaurant and opens late summer),  the new bar opening in the former Olive’s space on Larkin and Mensho Ramen, the 24-seat spot on Geary and Leavenworth with the longest lines to eat in San Francisco.

This is a very different pattern thanValencia Street, where former commercial spaces were transformed into restaurants. Or other parts of the Mission where closed industrial sites became new housing.

Aunt Charlie’s and the rest of the Tenderloin have maintained a remarkable continuity to the neighborhood’s past. Only the absence of illegal gambling in the back rooms of cigar stores and other businesses keeps the Tenderloin from fully replicating its 1930’s past.

In some cases, even in San Francisco’s Tenderloin authenticity only goes so far.