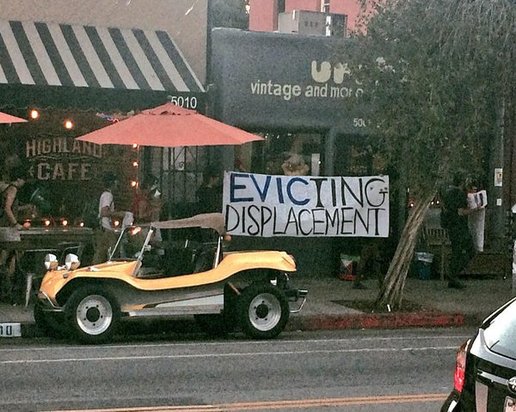 Protesting gentrification in the Highland Park neighborhood of Los Angeles

Despite massive media coverage, the 2016 presidential race has ignored the housing and economic crises impacting urban America. Neither Bernie Sanders nor Hillary Clinton has uttered the phrase “housing crisis” during their debates, as no question has addressed it. Republicans fear even mentioning a problem whose solution  requires federal dollars.

Presidential campaigns routinely overlook the nation’s housing crisis. I won a Project Censored award for the 9th most censored story of 2000-01 for an In These Times article about Al Gore, George W. Bush and Ralph Nader ignoring the affordable housing crisis in the 2000 campaign. I could have written the same story about the 2004, 2008 and 2016 elections.

Ignoring the nation’s housing crisis is a symptom of a larger problem. Addressing it requires changing how the media, politicians, and public perceive urban America.

It seems that we often only hear about low-income communities outside where we live is if they face gentrification. And many stories praise the success of such efforts.

For example, after years of positive publicity about the revival of Baltimore’s waterfront the impression was that Baltimore’s economic troubles were over. It took the police killing of Freddy Gray to bring national media attention to the larger reality, which is the persistent poverty afflicting Baltimore neighborhoods.

Last week, an article by the Initiative for a Competitive Inner City (“Despite Rhetoric, Poverty Remains a Stronger Force than Gentrification”) examined how the media are more likely to cover low-income neighborhoods through the frame of gentrification rather than the more common urban poverty. The article cited Detroit, Philadelphia and New York City, with the former city a particularly revealing example of people more likely to leaving their low-income community due to the lack of services, not forced displacement.

Gentrification is obviously a serious problem in many low-income, working-class neighborhoods. But when the media disproportionately focuses on displacement-causing investment and ignores the need for other forms of economic revitalization,  demands for action on the larger dimensions of the urban crisis get lost.

Focusing on gentrifying urban neighborhoods is an easier and more dramatic story to tell and the agents behind gentrification are readily identified. There are books and films on such legendary struggles as the battles to stop Brooklyn’s massive Atlantic Yards and the mass evictions and demolition at San Francisco’s International Hotel.  In contrast, describing low-income communities battling sidewalk drug dealing and a lack of neighborhood serving businesses is a longer,  more complex story. Decades of urban neglect are rarely the fault of a single developer or politician, and the causes often involve national rather than local policies.

Many in the media, like some activists, also see any economic revitalization of low-income communities  solely through the lens of future gentrification. I saw this firsthand when in 2011 Twitter sought to move to San Francisco’s long depressed Mid-Market area. Its relocation was conditioned on the city exempting Mid-Market and the adjacent Tenderloin from paying payroll taxes on net new hires.

As I describe in my new book, The Tenderloin: Sex, Crime and Resistance in the Heart of San Francisco, in 2011 the Tenderloin was in the midst of a fifty year economic downturn. That’s a remarkably long time without much private investment for a community only a short walk from the very affluent Union Square, SOMA and Hayes Valley neighborhoods.

The Tenderloin’s ability to avoid gentrification during the city’s long boom times is a tribute to its grassroots activism. In addition to winning city enactment of a wide range of tenant and land use protections, Tenderloin nonprofits were extremely aggressive at acquiring land and buildings, removing roughly a third of the housing stock from the speculative market.

But in 2011 the Tenderloin was in no position to claim victory. High crime, vacant storefronts, and a lack of evening foot traffic left many residents fearful. Many lived there not because they wanted to, but because could not afford to live anywhere else in San Francisco.

The Mid-Market/Tenderloin payroll tax exemption offered hope for making the Tenderloin a safer, healthier and more economically vibrant neighborhood. Existing residents would be the ones benefiting, since the vast majority lived in either subsidized housing  or were protected by strong rent and eviction controls.

But those skeptical of any positive changes for low-income neighborhoods opposed Twitter’s arrival as potentially gentrifying the Tenderloin. They talked as if Tenderloin activists had not spent decades to prevent this outcome.

After the city enacted the payroll tax exemption and Twitter arrived in 2012, none of the tenant displacement fears about the Tenderloin came to pass. Yet the media could not give up its gentrification frame. I was routinely asked by media to describe how Twitter was gentrifying the Tenderloin, and when I said otherwise the story either omitted the neighborhood or excluded my quotes. I spent hours being filmed by Alexandra Pelosi for an HBO documentary about tech’s impact on both the Tenderloin and San Francisco; both the Tenderloin and my comments were excluded from the film (See “HBO’s Dishonest San Francisco 2.0”).

As a result of these factors, those seeking to improve the quality of life for those living in low-income communities confront Republicans unwilling to fund real anti-poverty programs and many Democrats who view government economic assistance as either part of an urban redevelopment displacement scheme or as triggering gentrification.

This has left America’s urban crisis continually unaddressed. And while the Tenderloin is finally economically revitalizing thanks to critical local government assistance, most cities lack San Francisco’s resources to help revive distressed neighborhoods.

There’s still time to get the nation’s housing and urban crisis on the presidential campaign radar (it has never helped that the first two contests in Iowa and New Hampshire lack the type of urban neighborhoods that would force candidates to speak out on these issues). Injecting these issues into the 2016 presidential race is critical for getting the next president to address the urban crisis in 2017.

Randy Shaw is Editor of Beyond Chron and Director of the Tenderloin Housing Clinic. He describes the Tenderloin’s ongoing revival in The Tenderloin: Sex, Crime and Resistance in the Heart of San Francisco,