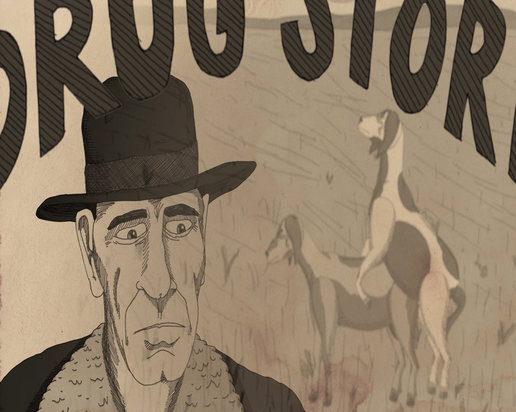 Cassie’s public slut-shaming obviously left long-term emotional scars.  Her becoming a sex columnist delivers a particular “up yours” to a mother whose successful “Victoria of the True North” book series eyerollingly praises prudish sexual attitudes.  The big city would seem to be a more accommodating place than the small town that rejected her.

Also annoying is the film’s attitude that lack of direct experience utterly precludes a person from claiming expertise.  An anti-transgender joke doesn’t help either.

Confused American viewers should note Beaver’s Ridge is a Canadian small town.  A flying Canadian flag offers one clue.  Another is the locals’ unconcern about not locking their front doors.

This mildly amusing film does offer a couple of pleasures.  Its O-face finale delivers the goods.   Cassie does revenge herself on her mother’s prudery.  Otherwise, LaLonde’s comedy does little to stiffen certain viewers’ humor organs.

Penny Lane’s documentary “Nuts!” may refer to the goat testicles famously used by its subject as an impotence cure.  Yet the madness Lane ultimately references involves more than just one man’s actions.

Yet Brinkley’s enemies in the medical profession and the Washington bureaucracy were determined to find a way to ruin the Goat Gland Doctor.  It would take a final confrontation with his sworn enemy Morris Fishbein, editor of the Journal of American Medicine, to ultimately shape Dr. Brinkley’s future fortunes.

Lane primarily tells Brinkley’s incredible story through animated sequences done by such animators as Drew Christie, Michael Pisano, and Rose Stark.  These animated sequences provide an entertaining mix of color and humor to this incredible tale.  They also provide a sense of life missing from the dry archival footage.  The archival footage’s best virtue is showing Dr. Brinkley actually existed.

The doctors and politicians struggling to undermine Dr. Brinkley appear as unscrupulous schemers in the animated sequences.  Fishbein, who sees himself as a crusader, comes across as small-minded and petty courtesy of a whiny nasal tone delivered by his voice actor.  The Kansas Attorney General’s appearance alternately evokes James Bond villain Blofeld and a ruthless pirate in equal measure.

Lane structures her film around Clement Wood’s biography of Dr. Brinkley, “The Story Of A Man.”  Excerpts from the book double as narration of the life story Dr. Brinkley loved to tell about himself.  The portrait of Brinkley that emerges from Wood’s book will be familiar to present-day audiences.  Dr. Brinkley saw himself as the affable outsider opposing the established and supercilious power brokers.  Needless to say, any resemblance between Dr. Goat Gland and certain current high-profile “outsider” 2016 GOP presidential candidates is “purely coincidental.”

Lane is more interested in telling Dr. Brinkley’s strange-but-true story than engaging in any sort of current political critique. Yet beneath the entertainment is an unfortunately still relevant object lesson.

Death and the fear of loneliness make Nicolas Pesce’s “The Eyes Of My Mother” a beautifully macabre viewing experience.

Francisca is the daughter of a Portuguese eye-surgeon who lives in America’s rural South with a husband who resembles the “American Gothic” man come to life.  Her life gets shattered by an unexpected tragedy that takes her mother’s life.  Certain unhealthy obsessions soon come to dominate Francisca’s life with harmful results.

Pesce’s decision to make his lead character Portuguese is not a coincidence.  If it’s Portuguese fados that Francisca listens and dances to, then they convey her feelings of constant mournfulness and melancholy at the early loss of a parent.  More importantly, Francisca’s life can be described as a constant state of saudade, the Portuguese term for a sense of permanent loss and damage.

Francisca’s saudade partly keeps the viewer from regarding her for much of the film as a monster.  Pesce also wisely leaves offscreen many of Francisca’s acts of violence, even those that make use of the surgical talents she learned from her mother.  However, the director ultimately places limits on the degree of empathy the viewer should feel for his lead character.  Empathy should never be a shield for the unforgivable.

Up to the arrival of that horrifying moment (which drew a gasp from one screening audience), Pesce shows the hollowness of stoking the “kill the monster” mentality.  That aggressive way of thinking avoids confronting the disturbing reality that anybody has the potential to turn into Francisca given the proper combination and timing of emotional traumas.

“The Eyes Of My Mother” also succeeds thanks to its frequent beautifully horrifying imagery.   Francisca’s taciturn father disturbingly devolves into a semi-mobile television-watching corpse.   The wrapped packages of human meat Francisca keeps in her freezer unsettles the viewer with speculation about their intended purpose.

Legendary horror film producer Val Lewton would have praised Pesce’s skillful use of the horror of the unseen.  But the emotional heart of “The Eyes Of My Mother” is purely Pesce’s creation.