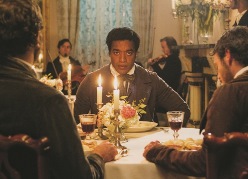 A Year’s Best Films list primarily serves as a declaration of the list maker’s aesthetic values. In the case of this annual list for Beyond Chron, it’s a desire to draw attention to films that successfully go beyond the Hollywood baseline of spectacle and/or reinforced cultural status quo to unexpected and provocative realms. “Gravity” and “Pacific Rim” may offer some of the best use of special effects seen on the screen this year. Yet compared to the minimalist “Prince Avalanche,” both Hollywood films don’t even come close to truly touching the heart. The present list is intended less as a final authority (e.g. “Stories We Tell” and “American Hustle” were missed) and more a summary of the better results of one individual’s indulging his cinematic curiosity.

From bottom to top, here are this writer’s picks for 2013’s best films:

BERBERIAN SOUND STUDIO—Aside from an amazing title sequence, the Italian giallo worked on by a repressed audio engineer is never seen onscreen. Yet Peter Strickland managed through inventive sound effects and viewer imagination to so slowly disturb viewers that they’ll be momentarily put off eating watermelon.

BELLEVILLE BABY—Mia Engberg’s avant garde recounting of a rekindled first love slipped under the Mill Valley Film Festival radar. It was less a story of re-awakened passion than mashing the Orpheus myth and leftist politics to analyze and dissect the meaning of the two leads’ relationship.

NO—Freedom from dictatorship as a product to be hawked was the subject of Pablo Larrain’s entertaining fictionalization of the ad campaign to end General Augusto Pinochet’s dictatorship. Viewer disbelief got suspended once one learned that the film utilized the actual (or cleverly reconstructed) campaign commercials.

BASTARDS—Claire Denis made Hays Code officials emerge screaming from their graves with a disturbing tale of corrupting capitalism, sexual deviance, and fungible loyalties. The extended finale in particular would leave viewers feeling emotionally soiled for a week.

BLUE IS THE WARMEST COLOR—The joys and pains of a person’s first true love got a sensitive and non-exploitative treatment from Abdellatif Kechiche. Anchored by Adele Exarchopoulos’ and Lea Seydoux’ performances as lovers Adele and Emma, Kechiche’s epic film portrayed the two lovers’ relationship in its physically and emotionally uninhibited glory.

BIG JOY: THE ADVENTURES OF JAMES BROUGHTON—Stephen Silha, Eric Slade, and Dawn Logsdon delivered a joyous film biography of the late Bay Area avant garde poet/filmmaker that showed how Broughton was a creative pro-sexual life force to his artistic peers if not necessarily his family.

PRINCE AVALANCHE—The evolving relationship between a man-child stud and a tightly wound veteran outdoorsman provided the basis for David Gordon Green’s effective remake of an Icelandic comedy. Thanks to a great score from Explosions in the Sky and David Wingo plus wonderful comic chemistry between Paul Rudd and Emile Hirsch, the film’s fictional 1980s summer in a Texas national park passed in a dreamlike haze.

THE ACT OF KILLING—Joshua Oppenheimer, Christina Cynn, and an Anonymous co-director mixed film fantasy with genocide in this intensely disturbing documentary. Dramatic re-creations will never look the same again after seeing the film’s Indonesian paramilitary executioners re-enact their crimes as glossy cinematic fantasies.

IN THE SHADOW—This gripping award-winning historical Czech thriller from David Ondricek considered whether truth is worth pursuing in a system which has begun inculcating politically convenient lies. An honest police inspector found his investigation of a robbery-homicide becoming compromised by higher-ups’ determination to use the crime to publicly discredit a local Jewish community center. His realization that his unraveling the truth will not bring justice for the victims soon called into question the point or value of his investigation.

LEVIATHAN—This amazing documentary from Lucien Castaing-Taylor and Verena Paravel alienated the “documentaries must tell a story” crowd. But for viewers who treated documentaries as windows into familiar worlds turned alien, this film transformed an ocean-sky-fishing trawler ecosystem into a hypnotically immersive semi-surrealistic and strange environment.

LIKE FATHER, LIKE SON—Hirokazu Kore-eda mashed the “switched at birth” story with the “nature vs. nurture” debate to memorable effect in this tale of a Japanese yuppie who believes the son he raised is somehow inferior to the biological son who was switched at birth. This gentle drama didn’t conceal its indictment of class-based snobbery regarding the worth of “lower” social classes.

12 YEARS A SLAVE—Steve Mc Queen’s searing adaptation of Solomon Northrup’s autobiographical account effectively captured the horrors of the American slave system by merely dramatizing its daily operations. From casual emotional dehumanization to images of bleeding cuts on naked backs, the brutality of the system could not be countenanced by anyone claiming human conscience or even compassion. Chiwetel Ejiofor riveted the screen as both an involuntary witness to the peculiar institution’s horrors and a man struggling to avoid being emotionally broken.