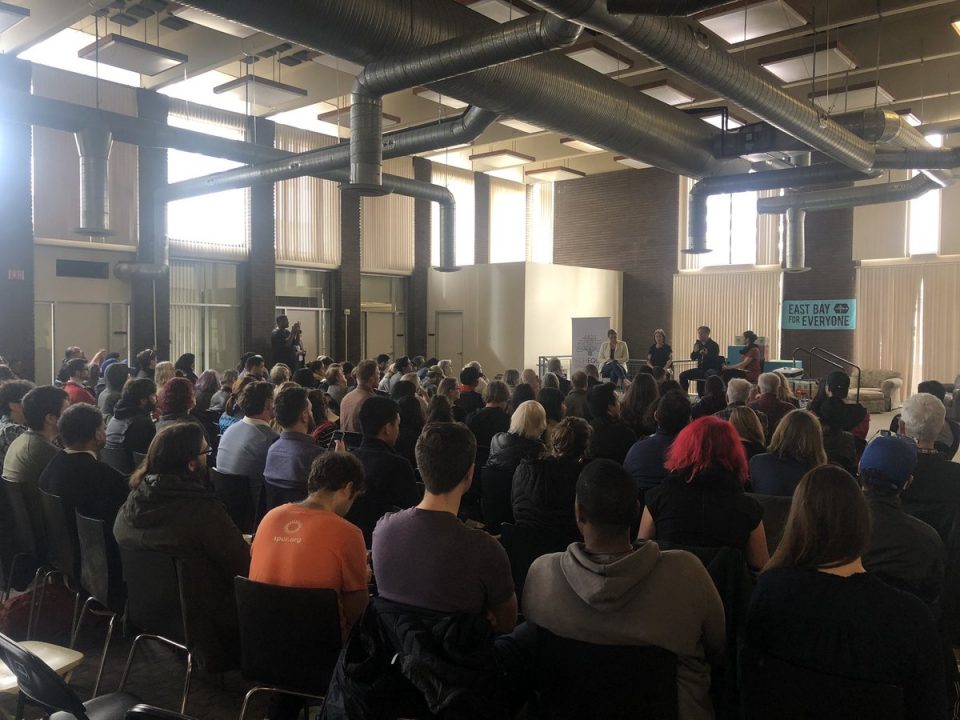 The meeting quickly dispelled the frequent and false claims that backers of building more housing don’t care about tenant protections. Bonta is as pro-tenant as any elected official in Sacramento. He bemoaned the quick demise of his bill early last year to repeal the Costa-Hawkins Act and said that while many view it as “untouchable,” he “wants to touch it.”

Skinner reminded the audience that she was on the Berkeley City Council when that notorious legislation finally passed. She spent considerable time criticizing the law’s impact on rising housing unaffordability.

Skinner made the critical point that the state must start treating the housing affordability crisis as an “emergency.” Describing it as a true “economic and environmental disaster,” she noted that ambulances are allowed to go through red lights and strict rebuilding deadlines are modified after a fire because these are responses to emergencies. In contrast,  cities and the state have not taken emergency measures  despite the desperate need for millions of more housing units in California.

Skinner’s new SB 330 evokes the emergency theme. It prevents cities from downzoning areas for housing and from imposing minimum parking requirements. It also requires projects get and up or down final vote within 12 months of the project application’s completion.

All of the speakers stressed the need to build more housing. Calling out Cupertino’s new anti-housing City Council, Skinner said that city “isn’t going to be getting away with attracting jobs without building housing anymore.” Wicks said “we are in a new era of robber barons,” and joined Skinner in announcing plans for a bill to raise taxes on some of the state’s biggest corporations.

A New Generation of Housing Activists

Increased political support for building housing is driven by the rise of a new generation of housing activists. I describe this rise in over a dozen cities in my book, Generation Priced Out: Who Gets to Live in the New Urban America .  I found a “generational divide” over housing. This is particularly true in Berkeley, where students recently came out to support a large housing development whose entire opposition came from boomers.

UC Berkeley Campus Organizing Director Sarah Abdeshahian played a leading role in getting such a large student turnout. When I saw her at the Town Hall I asked her who she worked for, only to learn she is a student volunteer! She is a true throwback to the days when students like Nancy Skinner and myself got involved in Berkeley politics, a pattern that steadily declined over the past decades amidst sharply rising tuition and greater school demands.

Abdeshahian told me what is driving students to mobilize for more housing. “Every Berkeley student has an issue with finding housing they can afford. They are just taken aback by the price.” She noted that students at UC Berkeley have friends at other colleges who pay nowhere near as much for housing, while many at Cal become desperate to obtain any place to live.

Long identified as a hotbed of anti-housing sentiment, the East Bay and San Francisco has become the legislative epicenter of the pro-housing movement. In addition to the three East Bay officials at the Town Hall, San Francisco’s Senator Scott Wiener and Assembly member David Chiu hold key leadership positions on housing. Assemblymember Phil Ting is also solidly in the pro-housing camp.

Further, Berkeley’s Lori Droste has introduced a “Missing Middle Initiative” that would pave the way for triplexes to be re-legalized in single-family home neighborhoods (which Minneapolis did in December). The Bay City Beacon has all the details on Droste’s proposal.

I’ll be talking about the Bay Area and statewide housing crisis and the specific role tech workers can play at an event for my book, Generation Priced Out, this Thursday. Sponsored by the TechEquity Collaborative, the event is open to all. For details, see here.

Randy Shaw is Editor of Beyond Chron and Director of the Tenderloin Housing Clinic, San Francisco’s leading provider of housing for homeless single adults.