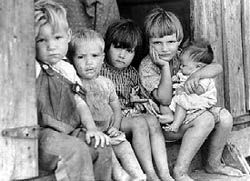 Lost amidst hurricane coverage and relegated to page 2 in today’s Chornicle is a Census Bureau report on the significant rise in America’s poverty rate over the past year. Jumping from 12.5 percent to 12.7 percent, the rise brought the number of poor people in the country to its highest level since 1994. Many news outlets, however, failed to note the stark juxtaposition of billions being spent on the war in Iraq as countless U.S. residents find it increasingly difficult to secure themselves and their families the basic necessities of life, including adequate food, shelter and medical care.

The Census Bureau revealed the rise in a report released early Tuesday morning, detailing a variety of statistics about income levels among Americans. Nearly all showed a decline in economic standing residents, including a decrease in the median household income, bringing it to a level that hasn’t been as low since 1997.

In addition, a minor increase in the number of people without health insurance occurred, from 15.6 percent to 15.7 percent. More than 45 million of America’s 290 million residents currently lack health insurance, while 37 million live in poverty.

The U.S. now stands as the nation with the highest level of poverty of any industrialized nation, capping years of growing hostility towards providing welfare, health care, and housing to the country’s most vulnerable citizens.

Whether the current administration will respond to the report remains to be seen, but the chances are slim. The steady rise in the poverty rate – this will be the fourth year in a row it has grown – coincides almost perfectly with George W. Bush replacing Bill Clinton.

More importantly, it serves as yet another reason for asking Bush to justify the enormous expense of fighting the war in Iraq. The billions upon billions being sunk into a battle fought for dubious reasons could be spent on any number of ways to reduce poverty at home. Increases in national health care, job programs for inner-city youth, and food subsidies for low-income families represent just a few.

As the war appears to be dragging on with no end in sight, and that ‘end’ possibly bringing about a situation in Iraq not significantly better than before the occupation began, Bush should be increasingly facing pressure to explain the benefit of the war to the populace.

Cindy Sheehan’s emotional request for justification after the death of her son serves as a perfect example of how everyday citizens can show Bush’s lack of moral sense. The loss of hundreds of lives for a dubious goal has struck a chord with many Americans, and could serve as a catalyst for more conservatives and centrists to oppose the war.

Hopefully, yesterday’s report will increase the pressure for Bush to provide economic justification as well. Americans should consider the fact that the globe’s wealthiest and most powerful nation allows more than one million of its residents to live in poverty shameful, and demand their leaders do whatever it takes to reverse the poor’s swelling numbers.